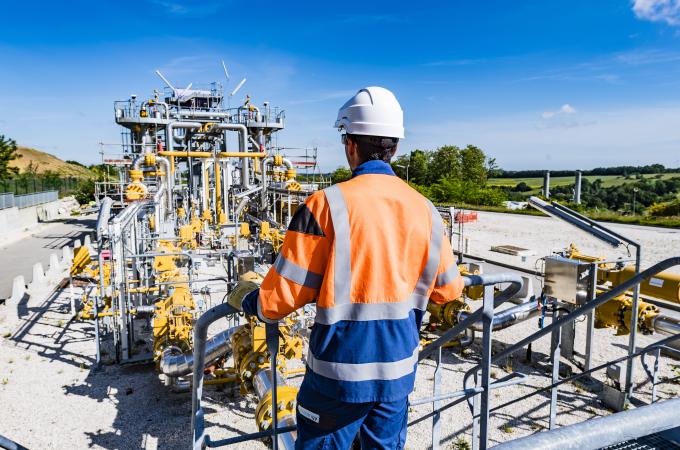 The company has invested £500 million in the Stublach site, contributing to security of supply in the UK, offering an efficient way to mitigate price risks and respond to market opportunities for a wide range of customers, including gas shippers, suppliers and third parties. The expertise from around the world have contributed to this major infrastructure project.

How a gas storage cavern is created:

The process involves drilling a 50 cm diameter hole through 300 metres of rock and 250 metres of salt. This was followed by inserting metal tubes into the holes and drilling the annulus with cement to create a leak tight seal.

The operation to create the 10 wells took more than 11 months. During this period, work began on the construction of the facility required to create the caverns (known as the solution mining facility or SMC) and laying the underground pipelines between the SMC and the wells. By October 2009, the SMC was complete and water was injected into the wells to dissolve the salt and create brine. In 2011, a further 10 wells were drilled and connected by underground pipes to the SMC. In all, more than 22 kilometres of underground pipe was installed. Installing pipework across open fields in the period from April to October - when top soil could be removed and reinstated - presented a number of challenges for our pipeline contractors due to the wet summers experienced at the time.

Throughout the development of the caverns, Storengy has worked with land owner INOVYN who supply the water to the SMC and (following treatment of the brine supply) to local industry for the production of bulk chemicals, such as soda ash and chlorine. The rate of cavern development is limited to the rate at which the local industry consumes the brine and as such the 20 caverns have taken nearly nine years to create. During the creation of the caverns, nearly 75 million cubic metres of water will be pumped into the salt strata and more than seven million tonnes of salt will be removed. Each cavern will be around 90 metres in diameter, over 80 metres tall (taller than Nelson’s Column) and will be located more than 500 metres below ground level.

Storengy has its own in-house geologists and solution mining engineers monitoring the development of the caverns using computer models validated by regular surveys using sonar systems to map their shape.

Natural gas is then stored over 500 metres below the surface in salt caverns. Gas is withdrawn from the national transmission system (network of underground pipes crossing the UK) and stored in the salt caverns until it required by our customers. A gas compression station is location on the Stublach site to move the gas in and out of the caverns.

Development of the gas plant began in 2010 with detailed engineering and the placing of orders for the main plant items which included the compressors, dehydration equipment compressors, dehydration equipment and fiscal metering. The compressor technology was carefully chosen to ensure a clean, efficient motor design. It is levitated on magnetic bearings and has the ability to rapidly start and stop many times a day. This is ideally suited to fast access gas storage applications, where injections and withdrawals can be made several times a day in response to rapidly changing gas demand and prices.

Commercial operation of the facility was achieved on the 1 September 2014, providing storage services to our customers from two caverns. The site was then officially opened by Lord Deighton, who as Commercial Secretary to the Treasury leads for the government (at the time) on major infrastructure investments. He praised the project for its investment and contribution to energy security. In January 2015, a further three caverns entered commercial operation. By the end of 2015, a further five caverns  became commercially operational. In 2019, the compression and dehydration capacity of the gas plant will be increased in size to coincide with there making ten caverns entering commercial operation.

Rock salt was deposited in this region some 200 million years ago, during the Triassic period. Seawater moved inland from the open sea, creating a chain of shallow salt marshes across what is today the Cheshire basin. As the marshes evaporated deep deposits of rock salt were formed.

There is evidence that the Romans used the salt springs to extract salt for foodstuffs. Since the 1890’s salt has been extracted by solution mining and the brine is used by the local chemical industry. The Cheshire basin is therefore the ideal location for gas storage.

A key asset for a higher flexibility in the UK

Stublach is the largest gas storage facility in the UK  enhancing the security of gas supplies to the UK. The 450 million cubic metres of gas stored a Stublach is enough to supply 300,000 homes with gas for cooking and heating for 12 months.